I wrote this circa 2014. Since then, a lot of things have changed, and a lot have stayed the same in the Bitcoin community. I forgot to publish this, but am doing so now to reflect on changes.

Yes, Coinbase can send Bitcoins from your wallet without your permission.

Last week, Coinbase announced a promotion where new Coinbase accounts registered with a .edu address would receive $10 worth of Bitcoins for free.

My friend John (named as so for the purpose of this post) and I realized that not everyone we knew were going to be interested with Bitcoin. We came up offering $5 upfront for the Bitcoins each person received if they signed up for a Coinbase account.

John was able to get 18 interested individuals in sending him their account balances, coming up to a total of .47005 Bitcoins. I however had a less impressive amount.

Later, John received an email notification from Coinbase that someone had emptied his wallet balance. 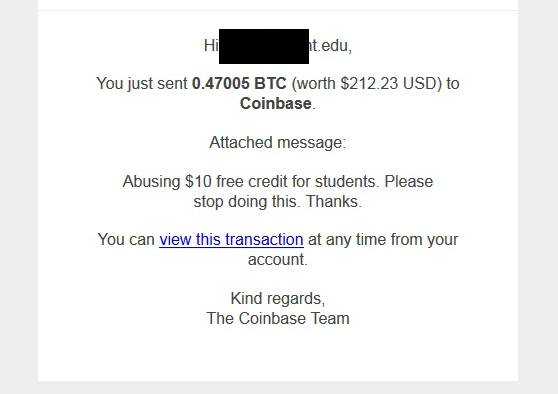 That someone was Coinbase. Make no mistake that Coinbase in all intents and purposes is not a traditional wallet. They will "spend" your coins if it suits their interests, as is seen here.

Keep all of this in mind when we head towards increased adoption of Bitcoin.

I used to be an engineer, now I bike around to make the world a better place.